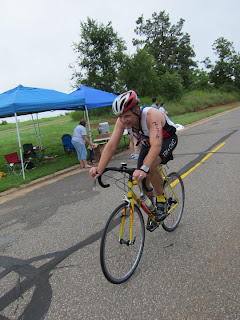 I have been working hard this summer to improve my fitness and loose a few pounds. My routine is to alternate between running and cycling. Saturday is my long ride day and I hit the street as soon as there is enough light to ride.

For several weeks the riding did not go so well. My frustrations about this difficulty became so great that I was growing concerned about my health. Was something wrong with me? Why so hard? I thought that my fitness was improving! I bonked so hard on one Saturday ride that I had to give up early and head back to the house with a completion of only 35 miles for the day.

Then one day while passing by my bike in the garage I suddenly for some strange reason gave the back wheel a little spin.

It moved maybe an inch. OOPS!

Turns out that for who knows how long the back brake had been pressed against the wheel. I had been in essence riding with the brake on for weeks.

You can imagine how that next ride went for me after fixing the break. Suddenly I was blazing down the road (well not exactly Lance Armstrong blazing but certainly faster than I had been previously).

It seems like my life is like those rides more often than I would like to admit. I get so frustrated about going slow, not figuring things out or feeling beaten down. Then it turns out more often than not the fix is actually something simple.

My hope is that during this summer season you can also find that simple solution the release the brake and get your mojo back. See you out there!