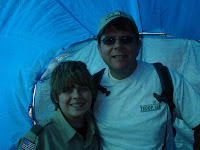 One of the biggest milestone events for a parent is when time comes for “the talk”. You know, the one that is most likely way more uncomfortable for you as the adult to say than it is for your child to hear. I know most kids grow up never hearing frank advice in the home about sex or about money. This seems odd to me since we are all bombarded daily by almost every medium imaginable about these two topics. I figure it is better my son get the information from mom and dad vs. getting it from his buddy, visa commercial or from that first American Pie movie.

I am breaking new ground personally here since I am in the majority of people who never had this discussed in the home. As a result, I have been planning my talk strategy for quite some time. The battle plan moves to high gear this weekend with a father son overnight backpacking trip. It would seem much manlier to break into this subject on a trail in the woods while doing manly things. If nothing else, this way no one will be around to see my embarrassment and we will be too far out for him to run for the hills.

I am calling this little hike the father-son vision quest part 1. Part two will come in a couple of years during a high adventure event somewhere deep in the middle of nowhere. In addition to “the talk” we are going to spend some time talking about creating a personal vision of who he is and what he stands for. My tools for this will be the Bible and the Scout handbook. By the end of our hike, it is my hope that he will have a written personal vision statement that he will be proud to share. I also hope that he will strengthen his foundational understanding about sex and how God views his responsibility as a man.

What about you parents?

Have you had the talk? Do you spend time with your kids talking about setting a vision and living a life of honor? What key Bible verses did you use that you would recommend to me?

I will let you know how our Talk goes for us. Pray that I will have the right words to share.

The last several weeks I have been serving the youth at my church on Wednesday nights during a special event known as Big Switch. These nights are loud and raucous with literally hundreds of youth running around. My 11 year old son at first was very much against my serving since this was “his night” to be without mom or dad and have fun. On my part, I felt bad just dropping him off and wanted to find a way to contribute. I am not one of those drop and run kind of parents and I do love working with youth. The deal we worked out was that I would stay as far a way from him as possible during the evening. (We actually had a big laugh about this one together)

The students who participate run the full circle of the social and economic ladder of our community and goodness am I glad to have the teenage years well behind me. I have found the messages presented to be particularly powerful and I get as much or more out them as the kids do.

Two weeks ago the students were asked to write down on a card something they were dealing with that they would like to turn over to God. No names required—just write it down. As volunteers, we were asked to stand at the front of the audience and be available to pray with those kids that wanted it.

Two students approached me for prayer. I was a little overwhelmed to think these kids would have the courage to walk up to a complete stranger and have prayer over their most intimate issue. I chose to not read the card at the time and to instead just pray with the student and uplift the issue together to Jesus. Later when I read what was on the card my heart just broke. The issues were different for each but there was one commonality.

Both had deep pain that was in their mind ultimately being caused by their parent. As a dad, this was just a stark in my face reminder again of the impact I have on the life of my child and how eternally important it is that I do everything I can to be the best possible parent that I am capable of being. Yes I have made a lot of mistakes and I know I will make many more but at least I am out there trying to learn and to improve.

Clearly very few parents have come to this same realization. Most, I will argue operate in the blind spot and have no idea the mistakes they are making and pain they are causing. This pain has potential to be passed down to generations to come. Something has got to change.

Are you a parent?

What are you doing to equip yourself for this ultimate job? Do you have mentor? Do you read books? What is your strategy?