Have you ever seen the movie, Gladiator? It is one of my all-time favorites and I have watched it many times. The lead character Maximus is one of those guys every man would wish to be. He is a true man’s man that is willing to die in the name of honor as he seeks to avenge the death of his beloved Emperor and family.

My favorite scene in the movie takes place as Maximus is standing in line with the other Gladiators awaiting his first fight in the grand coliseum of Rome. Slowly he rubs some soil in his hands and soon after a terrified man in front of him pees on himself out of fear.

There is no fear in the heart of Maximus. Instead, there is a steadfast resolve to face whatever challenge awaits on the other side of the gate.

Soon after the epic arena battle has been won the evil Emperor and murderer of his family asks “who are you?”

And here is his famous answer:

In many ways, I see this as a picture for the battle that is our lives. Every day we are stepping into an arena full of enemies and obstacles seeking our destruction. Every day is a battle to be faced and fought with full abandon.

The only way to win is to truly know with every inch of ourselves who we are and why we are here. Only then can we face it all with a conviction so strong that we would rather die than give up who God intended us to be.

At the end of my life, I want to die fully spent knowing that I gave it all for what was really important in this world.

I am husband, father, and servant. I am passionate. I am positive. I am persistent. I connect people to success and I will win this day.

Do you know who you are?

This was the opening comment from a manager I met with recently. Later in the day while in another meeting I asked a manager peer about her recent time off.

Me—“How was your vacation?”
Person—“Good but I did not do any work!” “I am so behind!”
Such is the life of exempt level employees and especially managers. We find ways to leave work but work never leaves us.
Our competitive work culture creates added pressure as time away can mean missed opportunities to contribute to key projects. This can lead to a perception of low value which in turn later can lead you to being the person selected for the next layoff. Not necessarily true but that is what many people think as they ponder time away from work.
Now let’s add to all of this the new hyper connected world we live in. Thanks to phones and tablets we are now connected to work 24×7. There is no excuse at all to miss that important e-mail update, project meeting maker or big data result.
For these reasons and more I have come to the clear conclusion there is no such thing as work life balance. I do not even like the term as I think it is deviously deceptive. The word “balance” creates a false hope that work and life is a 50/50 proposition. Striving for that level of balance can create far too much undo angst.
The solution I have worked out over the years is situational priority management.
I am successful in my work life because I recognize when it is time to turn it on, dig in and bust my butt to enable great results. There are times when this will require 60 hour weeks and 12 hours days and that is okay.
I am successful in my family life because I recognize when it is time to turn work off, get out and bust a move to enable great connections with my wife and teen son. When on vacation, I commit to being fully present with the family resisting the urge to work and by trusting those on my team to make the most of their empowerment.
As a father and a husband, I know that family is forever and if I am to be successful in the most important role God has given me I have to be deliberate with my time both as a parent and as a work professional. Success in one area can indeed lead to success in another.
Yes you can make everything work by managing priorities and by not letting things get out of whack forever. It is okay to have 60+ hour work weeks. The problem comes when the norm becomes all work and no family.
Remember, jobs are temporary but your family should be permanent! There will be times when you have to sacrifice in one area to have success in another. The key is just to recognize this, be deliberate and live guilt free in each with proper priority management.

So dump the guilt, forget balance and strive for success instead. It is possible to win at home and at work.

So much of life is a simple matter of routine. Same drive to work. Same people surrounding you. Same church on Sunday, Same chicken dinner every Tuesday and on and on and on it goes.

Frequency creates numbness to our surroundings and often to our life. To break free, many people end up seeking a rush hoping to escape and find excitement. This can be positive with goals to learn new skills, go on a special trip, try that food that cannot be pronounced, start that devotional, go for that dream job. Of course there are unhealthy ways to break out that often lead to debt, distress and even divorce.

Getting un-numb productively takes work but most of all takes awareness. It seems too often that we take for granted those things that are frequent. The seemingly mundane can be our best window to happiness if we simply take a moment to realize these are the moments that truly make our lives meaningful. There is no need to go jump out of a plane or run with the bulls. Perhaps instead we need to just add some spice and some thought to the greatness that surrounds us every day.

Imagine how much better that drive with the kid to school could be with some deeper conversation on the way? Imagine the smile on your partner’s face from an unexpected hug? Imagine how much deeper your time with God could be with just a few minutes in prayer to start the day. Heck, even that Tuesday chicken dinner could be better with just a slightly different spice.
For me, I love the frequent as it brings sustaining comfort and opportunities for appreciation of the present. Perhaps your best opportunity is right in front of you too.
June 18, 2010 ~ David C. ~ 4 Comments 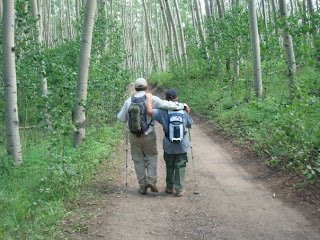 If you have read my blog any at all you might guess that I would have a lot to say about the importance of fathers.

I would like to challenge all the current and future dads out there to take a moment and reflect deeply on your role. You have a generational impact on your family. How will you choose to make use of this responsibility? Will you run away seeking the shinny object in your life? This object could be your career, your hobby, your neighbor’s wife and any of the thousands of other distractions that get men off track.

Chasing the object will never match the importance or the joy you will get from a loving child that is looking to you for leadership and teaching.

The bottom line is that you are important!

Don’t believe me? Check out the research

Still don’t believe me? Ask your wife or child’s mother

Still don’t believe me? Look into the eyes of your child and ask him/her

Our children and boys especially are experiencing a crises caused by a lack of positive father leadership.

You don’t have to be a superstar or a perfect person to be a great father!

Just step out and do your best. I think the results might just surprise you. 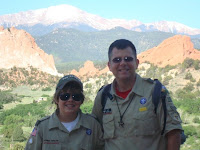 I grew up without a dad. My mother and father divorced when I was really young and then he died shortly thereafter. All I have of him are a couple a vague memories and a few faded pictures. There were no times tossing a ball, fishing together, going to camp, talking about girls or any of those father/son things all of my friends seemed to have. To say I grew up bitter about this and angry at God for my predicament would be a bit of an understatement. It seems like I blamed most of my youthful problems on not having this magical person called “Dad” to give me Yoda like guidelines about life.

The funny thing about the plans God has for our lives is that we don’t understand them at the time but usually it turns out He is preparing us for some greater purpose.

I was fat—Now, I love to run, ride bikes and hike
I was shy with girls—I met the love of my life through a blind date and now have enjoyed a wonderful 13 year start to a lifetime together.
I was angry inside—Now, I hate to see others in emotional pain and have a passion for serving others.
I was angry with God—Now, I know He wired me this way for positive reasons I still seek to understand.

I grew up without a dad—Now, I do all that I am capable to be a good father to my son and to be a good influence to boys/adults I serve in Scouting.

I hope as this Father’s day approaches you will take a moment to look at your gifts as a father and/or as a son. Are you striving to be the best God has wired you to be? Are you growing and learning even as you make mistakes?

Your actions today will impact generations to come. Make the most of it while you can.